School Psychologist of the Year Recipients 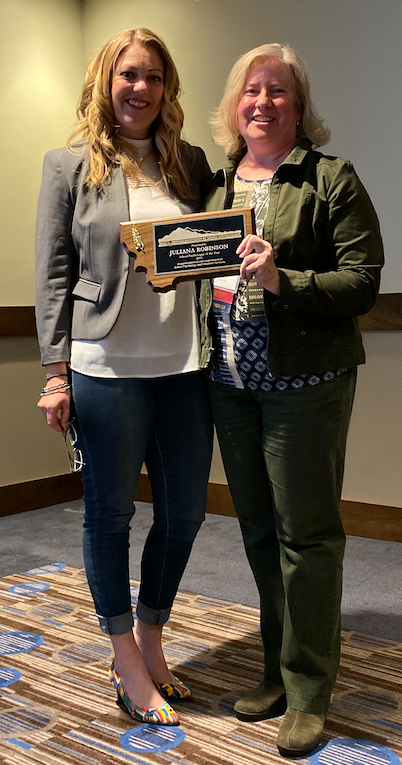 This year’s award recipient for the MASP 2019 School Psychologist of the Year Award, Juliana Robinson has been serving Montana schools through the Park County Special Education Cooperative for 12 years and one who is passionate about the field of school psychology. Beginning this school year, she has transitioned to working for the Belgrade Public School District. Those nominating Juliana all agreed that she is one who understands how to develop strong relationships with students, teachers, parents, administrators and support staff in a professional manner. She is one who works tirelessly and has accomplished developing an ADOS team for her schools and specialized programs in pre-school and alternate education settings in addition to completing the regular duties of a school psychologist. They shared that Juliana has continued to aggressively pursue opportunities to further her own education, level of knowledge and skills since starting her career. Also, Juliana has provided many training opportunities for staff and supervision of interns. Juliana has been active with MASP since graduate school doing an incredible amount of work for MT psychs, serving on MASP committees, holding the office of President and currently chairing the Membership Involvement committee.

One nominator noted that Juliana exemplifies the qualities that make for an outstanding school psychologist. A fellow colleague shared that Juliana’s heart is in this work and recognized that Juliana believes in the importance of what we do and supporting all kids. Another noted that Juliana’s skills for explaining the eligibility process has helped families and staff to better navigate through special education evaluations and that her calm demeanor allows anyone to approach her and ask her questions as needed. Her characteristics of being an exemplary person, role model, supporter, and professional were shared throughout her letters of nomination. Juliana is married with two children.  MASP extends congratulations on being named the 2019 School Psychologist of the year.

Monica Martin was the 2018 School Psychologist of the year. She is a school psychologist with the Missoula Area Education Cooperative and has been serving in Montana’s school system for 12 years. Letters of recommendation were written by the Seeley Lake Superintendent,  a teacher, the Special Education Director, and a secretary.

The secretary stated:” she has taken time to help me with infinite Campus and she has donated snacks to my office snack box for students that may need them”

Marit Waldum of Missoula County Public School District was named 2017’s School Psychologist of the Year at the MASP 2016 Fall Conference in Helena, MT.  Marit has supervised numerous School Psychology students.  In providing guidance and structured learning, Marit allows her students to teach and collaborate with her.  She is an expert in preschool and autism evaluations.  She is a multifaceted school psychologist who serves students from preschool through elementary ages.  Marit is always friendly, optimistic, and open.  Her peaceful, level-headed, kind, warm, and engaging spirit allows her to continually contribute to conversations in a productive, meaningful manner.  Marit is well respected by her peers and continues to make a positive, lifetime impact on many, many people.

This year’s recipient of the Montana Association of School Psychologists (MASP) School Psychologist of the Year was Jessica Carranza.  As always it is clear Montana has some amazing School Psychologists. The nomination packet for Jessica showed she is one of those amazing school psychologists. She is a full-time school psychologist employed by Great Falls Public Schools. Jessica is involved in her schools in every part of the way; working with teachers, assessing students, running groups, working with outside agencies, RTI/MTSS, and brainstorming with her school teams. She builds relationships with those that she works with, adults and students. She has a can-do attitude. She is supportive of those around her. Jessica has outstanding qualities which is why she was chosen to be the 2017 MASP School Psychologist of the Year.

Shawna Rader Kelly of Bozeman School District was named 2015’s School Psychologist of the Year at the MASP 2015 Fall Conference in Bozeman, MT.  Shawna has been an active force not only in her district, but at the state and national levels as well.  Shawna is a PREPaRE Trainer and the leader of MASP’s Crisis Response Committee.  She actively works with Montana’s Office of Public Instruction to advocate for school psychology and serves as the chair of the MASP Credentialing Review Board.  Shawna is also an incredibly active member in NASP serving as Montana’s NASP delegate as well as a regional leader.  Shawna’s expansive breadth of expertise, her impressive skill set, and her tireless dedication make her a standout school psychologist.

Julie Parker of Big Sky High School in Missoula was named 2014’s School Psychologist of the Year at the MASP 2014 Fall Conference in Helena, MT.  Among many professional roles and duties, Parker received this award due to over 15 years of outstanding service.  Over those years, she has served on the MASP executive council, supervised University of Montana School Psychology graduate students, and participated in union work for her rural cooperative.  She was further honored for her years of service on the Flathead Indian Reservation and in other rural Montana schools.  Julie is a wonderful asset to our state and profession!

You can nominate a deserving colleague for MASP School Psychologist of the Year for 2021-22.

Candidates must be practicing school psychologists who spend the majority of their time providing direct services to students, teachers, and parents.